Massive Crowds in Game of Thrones' 'Battle of the Bastards'

HBO's Game of Thrones' 'Battle of the Bastards' episode contained what was perhaps this year's most stunning television moments - a monumental confrontation waged with horse riders, archers and foot soldiers to a very bloody conclusion.

And behind many of the elaborate battle scenes were digital visual effects from Australian-based Iloura, which also lent heavily on Massive to orchestrate army formations, fighting soldiers and horse actions for the dramatic scenes - watch Iloura's vfx breakdown for the Battle of the Bastards sequence. 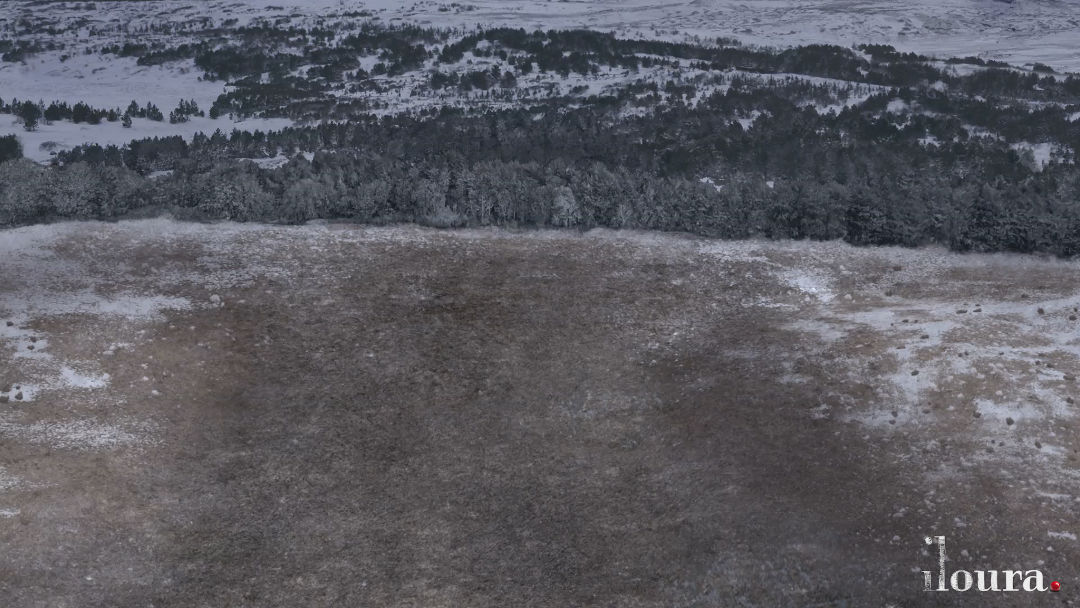 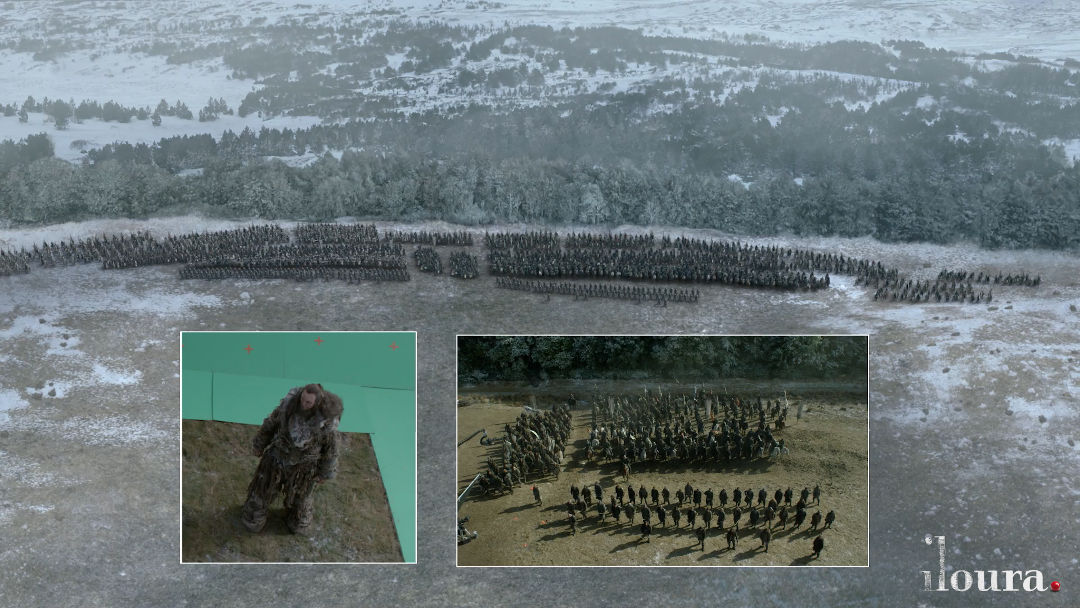 For high views of the Battle of the Bastards confrontation, Iloura combined live action plates, extra greenscreen footage, CG keyframed soldiers and Massive agents to depict the battle.
Massive would end up being ulitized by Iloura in both more ‘traditional’ army formation shots - featuring soldiers led separately by Jon Snow and his adversary Ramsay Bolton - and in elaborate choreography for a shield wall sequence as it is ploughed down by a charging horse army. The studio also found creative ways for Massive to link both digital horse and rider together in order to portray believable and dynamic riding motion.


One of the first kinds of Massive shots tackled by Iloura for the sequence featured the Bolton army standing in formation. Here, live action with principal actors and army extras was filmed on private land in Northern Ireland. Of course, the true scale of the armies was never going to be fulfilled with extras alone, so multiple plates were shot and stitched together, and additional soldiers, along with their weapons, flags and banners, were made possible through Massive. 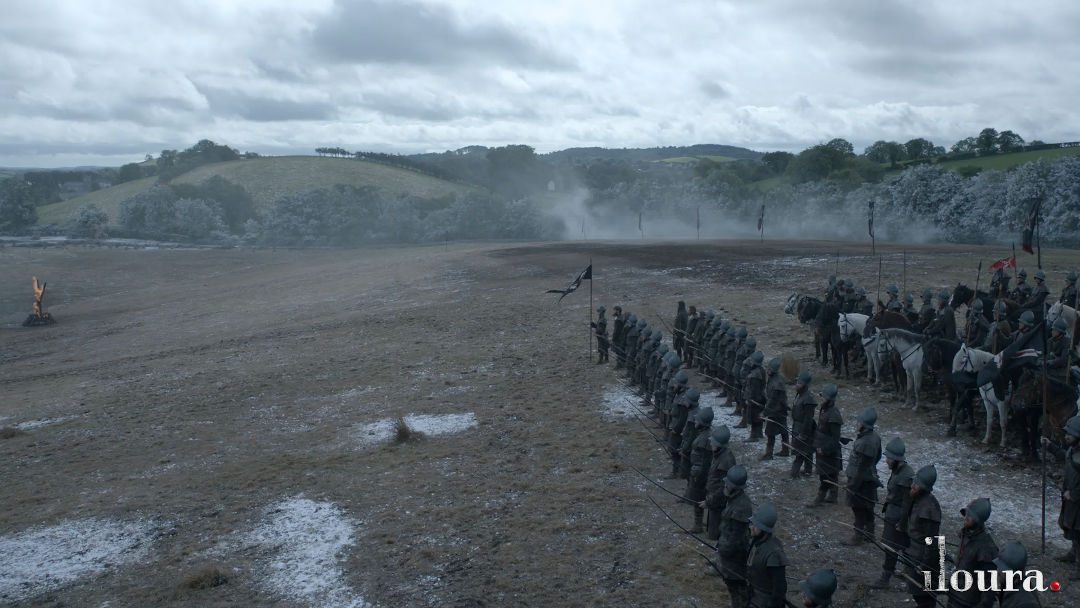 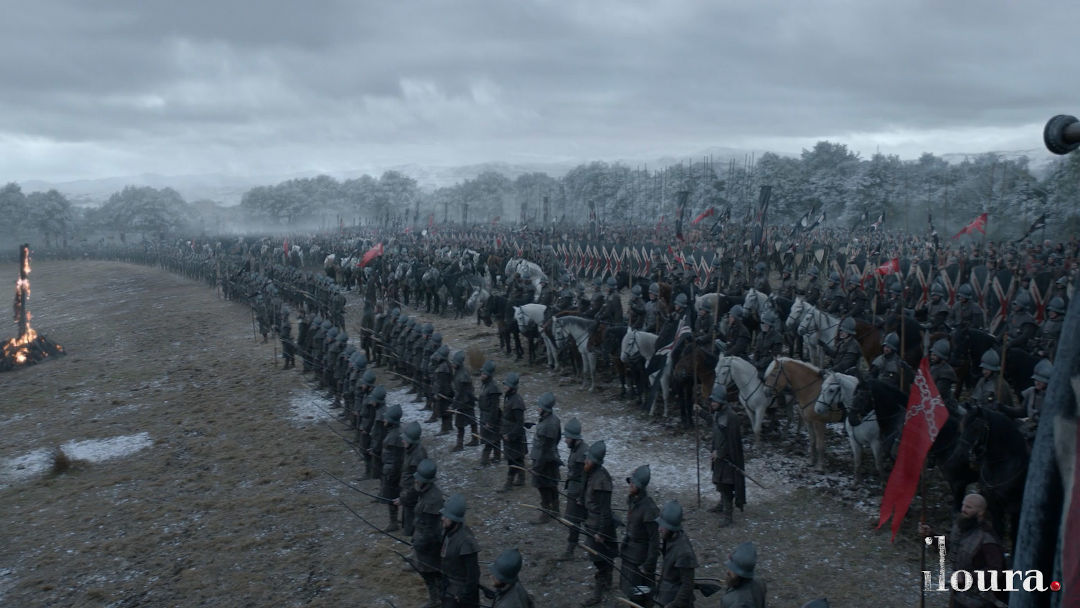 Final shot featuring live action soldiers and Massive agents and banners and flags to fill out the army
"We used that standing army as a test bed, explains Iloura senior crowd TD James Hollingworth. “Normally you try and tackle some of your harder shots first but on this we made the decision to try and get something working and through the pipe - then we’d concentrate on the harder shots."

It was the first time Iloura had actually used Massive on a project. That meant the facility had to launch head-first into a pipeline development stage. This involved augmenting the studio’s current pipeline for CG characters, which on Game of Thrones relied on motion capture of various actions and poses done through iPi Soft's markerless mocap toolset and character work done in Maya, and rendering in V-Ray.

The army formation shots were made somewhat more challenging by the need to incorporate a certain amount of movement amongst what was supposed to be an 'idle' army. "We made an idle action for about 1000 frames", notes Elliott, "with archers at the front and then shieldsmen and different rows of horse and rider. If the spears and arrows seemed a bit subtle we amp’ed them up a bit. There's a lot of tension in this shot so it worked in our favor."


Things were then amp'ed up even further for a significantly challenging sequence which depicts a Bolton shield wall army compressing a compacted Stark army, until the last minute arrival of reinforcements on horseback from the Knights of the Vale plow down the Bolton soldiers. Massive was used for a high-angle view of that action. 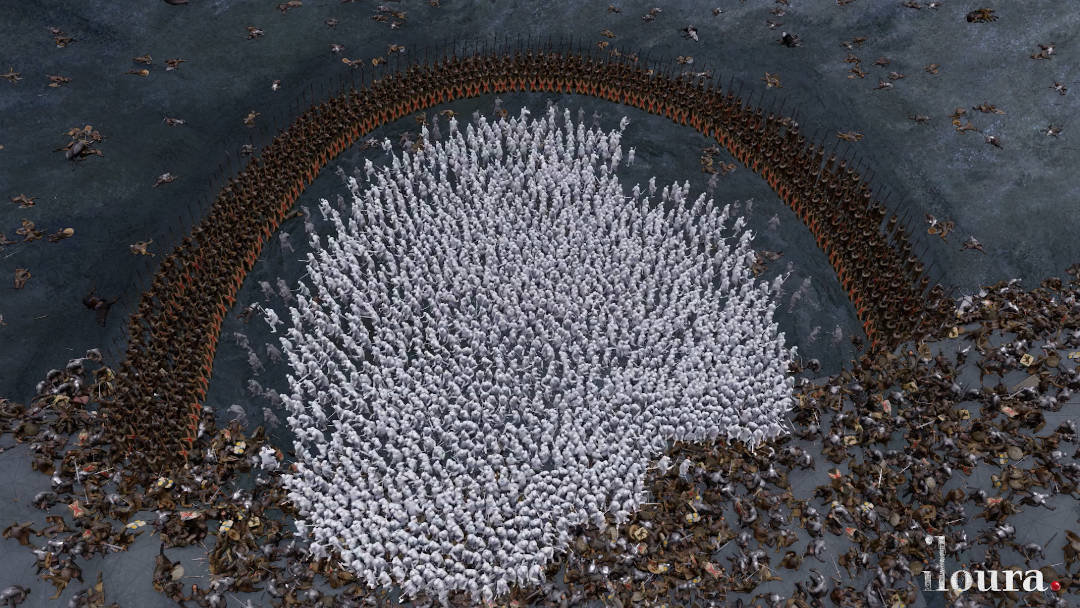 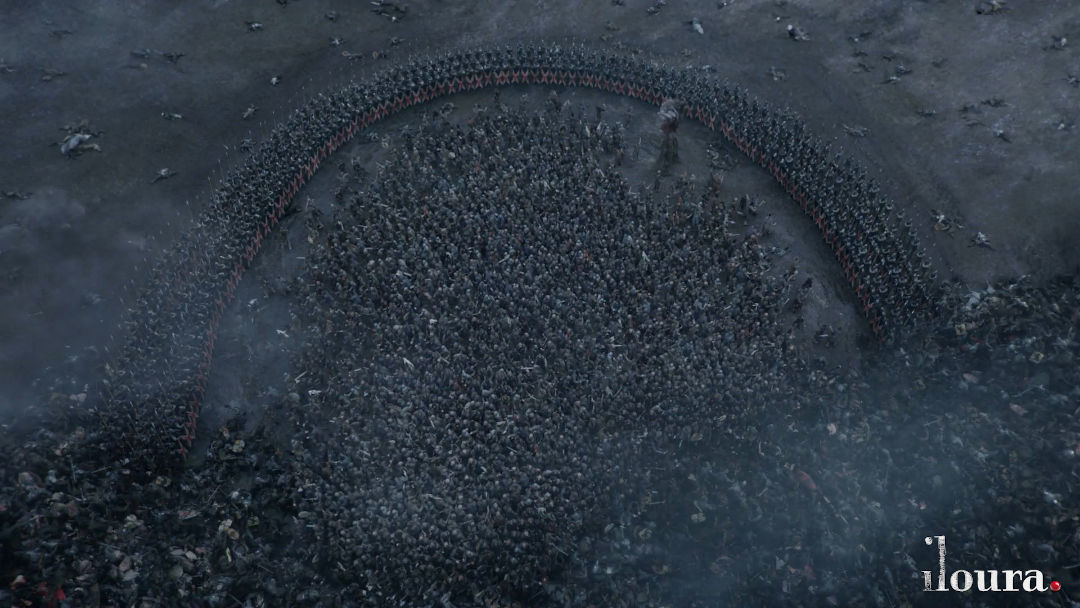 Iloura used Massive to help place a the shield army, dead and dying soldiers and the compacted army that gets surrounded


Firstly, Iloura employed Massive to arrange the dead or dying members of the Stark army into a compressed mound of bodies and horses. In order to create a realistic depiction of how these bodies and horses would have fallen, Hollingworth implemented what he called a 'kill switch' in Massive.

"After a second or two of action, the kill switch would make these Massive agents just die and go rag-doll. It would then give us one frame of sim that we could use for set dressing on the ground as dead bodies. The reason I wanted them to move for a second was, I wanted them to start fighting and then get a unique pose, and then go into rag-doll so we would have a unique dead body pile." 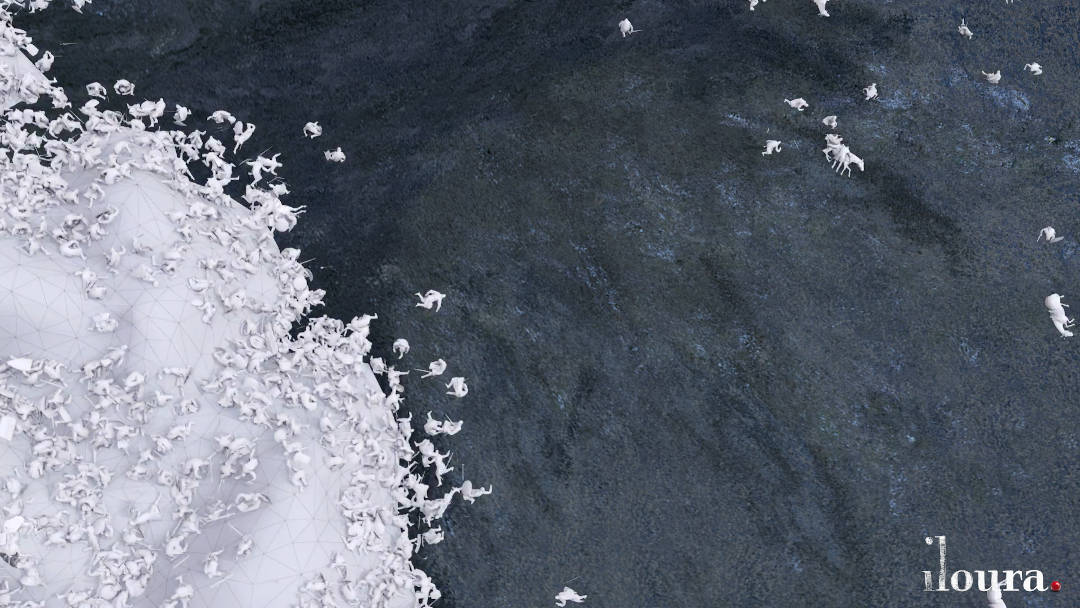 For the charging shot, a 'kill switch' in Massive enabled fallen soldiers and horses to be uniquely placed


A combination of keyframed action and Massive simulation then made the horse charge and its aftermath possible. For some of the riding motion, Iloura determined to link rider and horse as one joint structure in Massive, the idea being that each would run on different tracks for animation but appear as convincingly as possible.

"What we had was horse animation and rider animation," describes Iloura Lead Animator Dean Elliott. "You have the horse drive around and do the path finding action, but then the rider was separate and he could do separate idle actions. So, for example, if he came across a Bolton he could run an attack action, which wouldn't affect the horse." 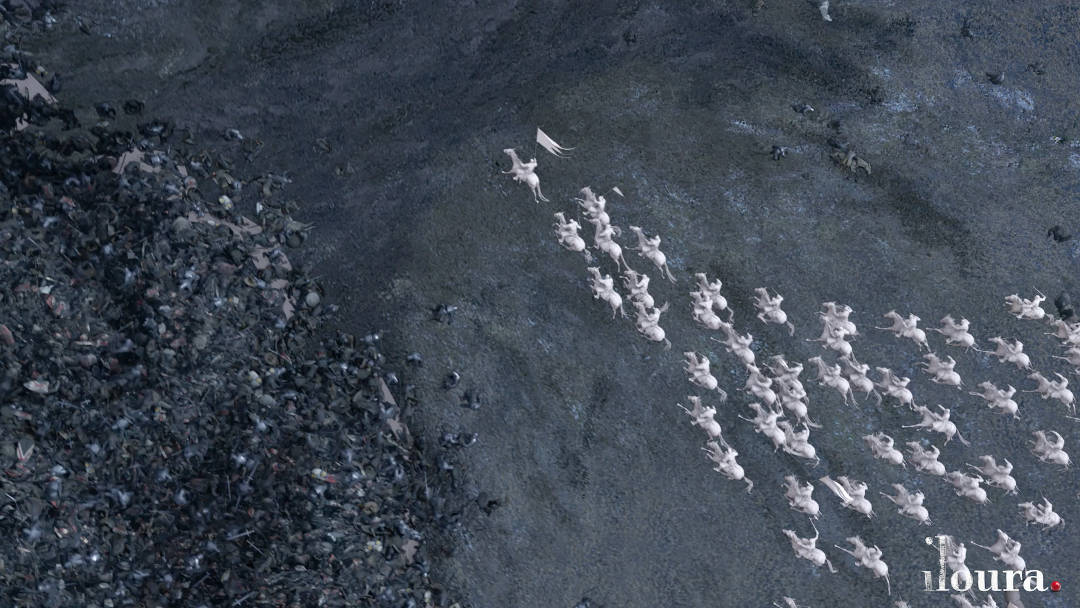 
"I had the rider’s hand attached to a joint on the horse," continues Elliott. "Then I used the IK grab to attach the hand and the two feet. So that meant if the horse had to turn a corner we could get the rider looking like he was controlling and steering the horse properly. Then for shots where the armies collide - and there’s a lot of these - the riders would get thrown off and we could just break that IK. We definitely got a lot of value out of it."


Iloura also called upon Massive for some rather ingenious shot solutions. The first was with the software’s dynamics and cloth tools to deal with flags, banners and even horse manes and tails. The latter proved extremely successful, as Hollingworth outlines. 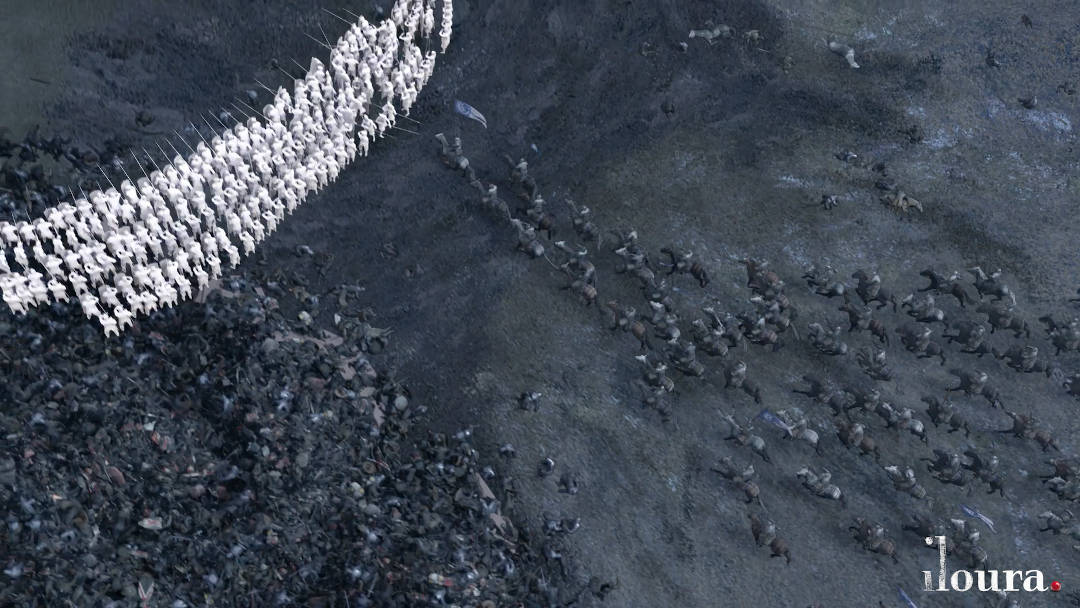 Banners, flags and horse manes and tails were all elements that Iloura could simulate in Massive.

"I ran a simple R&D test of putting simple geometric mesh ribbons on the manes and they looked like mohawks. We just put a texture on them and let them run. We got some really nice manes and tails just having ribbon geometry running through the cloth engine in Massive. Surprisingly, one of the ways it worked the best was when the horse was at full gallop where the mane was streaming behind it. This saved the fx guys a lot of work."

Another challenge Iloura had to deal with was the intensity of the battle, especially the pure velocity at which horses were running into other horses and soldiers. “When they were running at full-tilt,” notes Hollingworth, "they would hit each other and it would just kick an agent and make it fly off into the middle of nowhere." 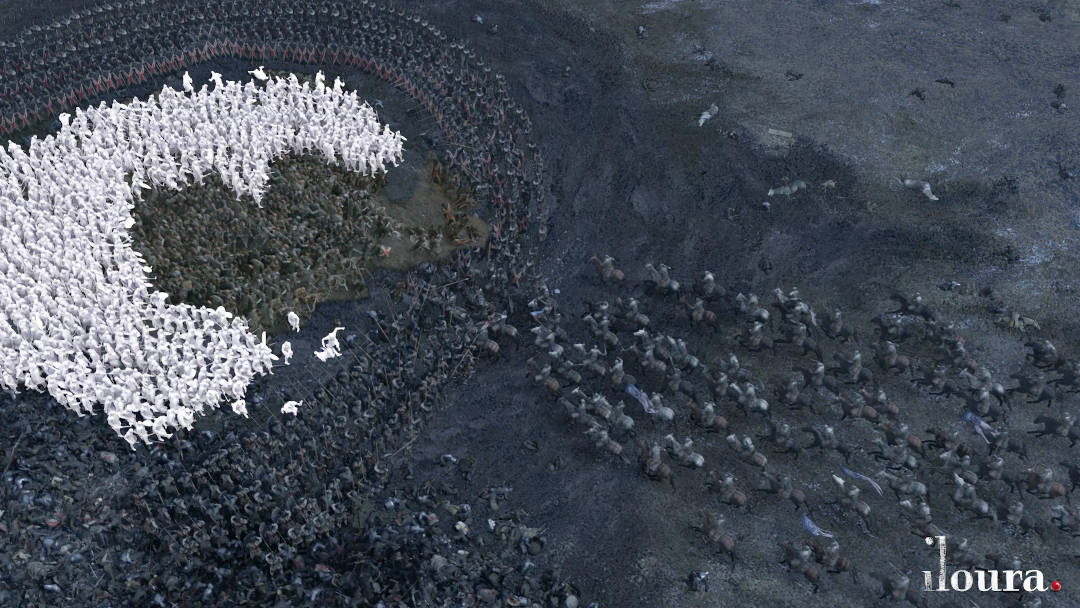 A specialized linkage between horse and rider was implemented into Massive to help with making the charging more convincing, especially when the horses changed direction

Since Iloura had very specific notes about how the horses were to plough down soldiers, a solution was required to match that look with Massive. "What we did was put two huge bone segments at the front of the horse and parented it to the neck," says Hollingworth.

"We called it the 'hot dog' horse because it looked literally like a hot dog running through this crowd. It would bring down complicated sim times, since if everything had gone rag doll then we wouldn't have got the look we were after. Still, it was pretty funny watching a whole lot of hot dogs plow down Bolton soldiers." 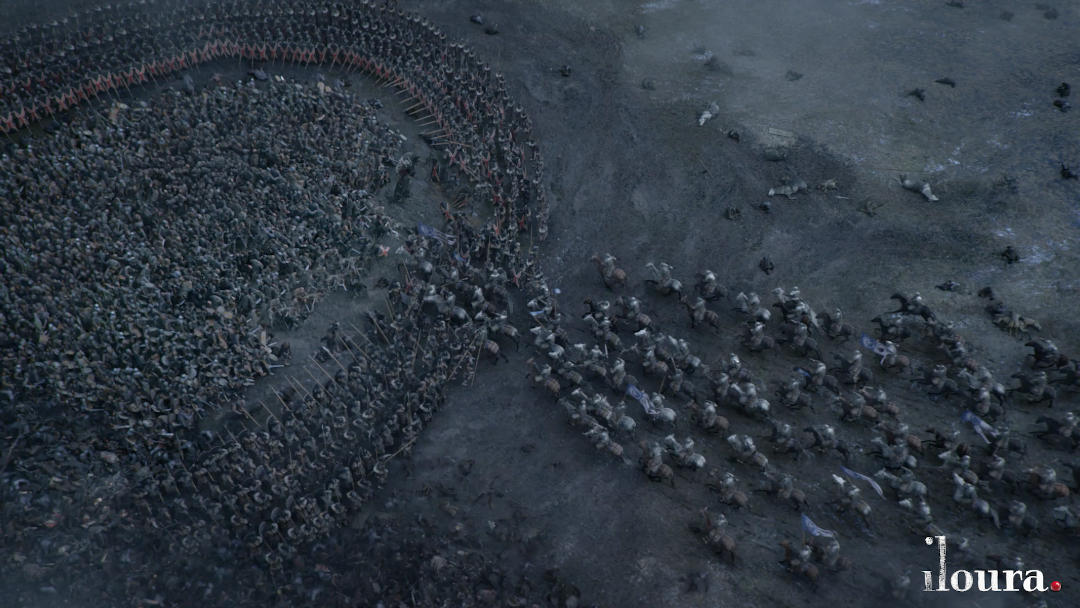 Occasionally, Massive would seemingly find some - unintended - solutions of its own. At one point in the standing army shots after artists had programmed in the various armies, factions, type of soldier and armor into the brain, a combat agent found it all too much.

"It just so happened that one Bolton agent decided to become a Wildling,” relates Hollingworth. “Because it was based off of the combat agent and he was surrounded by Bolton soldiers, he didn't know what to do. So he just sort of sat there going, 'I'm screwed!', and not knowing which one to attack."

Perhaps if all the other agent really did know the scope of the epic battle, they might just think so too.